Download TDS / Manual
Source: Escherichia Coli.
Sterile filtered colorless solution.
Napsin A Aspartic Peptidase, also known as NAPSA is a member of the peptidase A1 family. NAPSA is involved in the processing of pneumocyte surfactant precursors. Furthermore the activation peptides of aspartic proteinases take part as inhibitors of the active site. These peptide segments/pro-parts are considered essential for correct folding, targeting, as well as control of the activation of aspartic proteinase zymogens. The pronapsin A gene is expressed mostly in lung and kidney. In addition, NAPSA translation product is expected to be a fully functional, glycosylated aspartic proteinase precursor which contains an RGD motif as well as an additional 18 residues at its C-terminus.
NAPSA Human Recombinant produced in E.Coli is a single, non-glycosylated polypeptide chain containing 380 amino acids (64-420 a.a) and having a molecular mass of 40.9kDa. NAPSA is fused to a 23 amino acid His-tag at N-terminus & purified by proprietary chromatographic techniques. 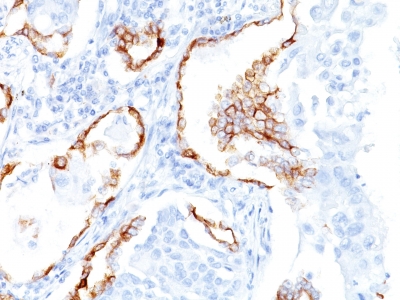