Download TDS / Manual
Source : Human Cells;
Interferon -Alpha/Beta Receptor 2 (IFN--Alpha/Beta R2) is a single-pass type I membrane protein which belongs to the type II cytokine receptor family. It complexes with IFN--Alpha/Beta R1 to form the signaling receptor complex for the family of -Alpha and Beta IFN subtypes. By alternative splicing, IFN--Alpha/Beta R2 can exist as a secreted soluble protein or as a type I membrane protein. IFN--Alpha/Beta R2 is the principal ligand binding subunit of the receptor. Ligand binding is stabilized by the subsequent association with IFN--Alpha/Beta R1, resulting in the formation of a signaling ternary receptor complex. IFNAR2 was detected in most lymphocytes, monocytes, and granulocytes, although IFNAR2 expression was higher in the monocytes and granulocytes than in the lymphocytes. Among the lymphocyte subsets, IFNAR2 showed high expression in natural killer (NK) cells and low expression in T lymphocytes. Isoform 1 and isoform 3 of IFNAR2 are directly involved in signal transduction due to their interaction with the TYR kinase, JAK1. Isoform 1 also interacts with the transcriptional factors, STAT1 and STAT2. Both forms are potent inhibitors of type I IFN activity. 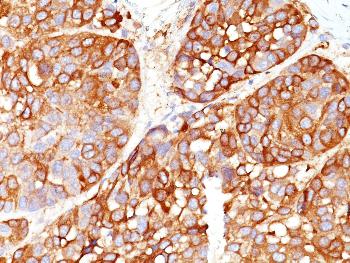