Download TDS / Manual
Source: Escherichia Coli.
Sterile Filtered clear solution.
Yersinia enterocolitica is a Gram-negative bacillus-shaped bacterium, which is a member of the Enterobacteriaceae family. Y.Enterocolitica is motile at temperatures between 22-29°C, however becomes non-motile at normal human body temperature. Y. Enterocolitica infection causes the yersiniosis disease, which is an animal-borne disease occurring in humans, as well as in a various groups of animals such as cattle, deer, pigs, and birds. Yersinia enterocolitica is a heterogeneous group of strains, which are conventionally classified by bio-typing into six bio-groups on the basis of phenotypic characteristics, and by serotyping into more than 57 O serogroups, on the basis of their O (lipopolysaccharide or LPS) surface antigen. Five of the six biogroups (1B and 25) are considered as pathogens. Nevertheless, only a few of these serogroups have been linked with disease in either humans or animals. Strains which belong to serogroups O:3 (biogroup 4), O:5,27 (biogroups 2 and 3), O:8 (biogroup 1B), and O:9 (biogroup 2) are most frequently isolated worldwide from human samples. Still, the main Y. enterocolitica serogroup in many European countries is serogroup O:3 followed by O:9, whereas the serogroup O:8 is mostly detected in the United States.
Recombinant Yersinia Enterocolitica (O:9) YopD produced in SF9 is a glycosylated, polypeptide chain having a calculated molecular mass of 34,603 Dalton. Y.Enterocolitica (O:9) YopD is expressed with a 10xHis tag at N-terminus and purified by proprietary chromatographic techniques. 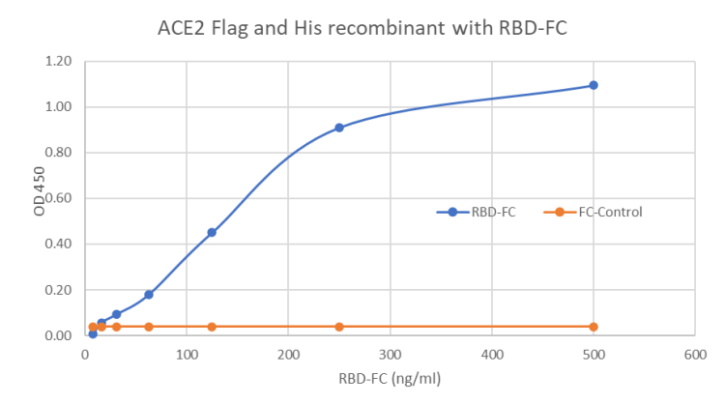 Recombinant Human ACE2 His and...