Download TDS / Manual
Source: Sf9, Baculovirus cells.
Sterile Filtered colorless solution.
Fibroblast Growth Factors (FGFs) comprise a family of at least 18 structurally related proteins that take part in a multitude of physiological and pathological cellular processes, includingdifferentiation, cell growth, angiogenesis, wound healing and tumorgenesis. The biological activities of the FGFs are mediated by a family if type I transmembrane tyrosine kinases which undergo dimerization and autophosphorylation after ligand binding. 4 different genes encoding related FGF receptors. Multiple forms of FGFR-1 to -3 are generated by alternative splicing of the mRNAs. A frequent splicing event involving FGFR-1 and -2 results in receptors containing all three Ig domains, referred to as the alpha isoform, or only IgII and IgIII. Only the alpha isoform has been identified for FGFR-3 and FGFR-4. Additional splicing events for FGFR-1 to -3, involving the C-terminal half of the IgIII domain encoded by 2 mutually exclusive alternative exons, generate FGF receptors with alternative IgIII domains (IIIb and IIIc). A IIIa isoform which is a secreted FGF binding protein containing only the N-terminal half of the IgIII domain plus some intron sequences has also been reported for FGFR-1.
FGFR2 produced in Sf9 Baculovirus cells is a single, glycosylated polypeptide chain containing 507 amino acids (22-289a.a.) and having a molecular mass of 56.8kDa. FGFR2 is expressed with a 239 amino acid hIgG-His-Tag at C-Terminus and purified by proprietary chromatographic techniques. 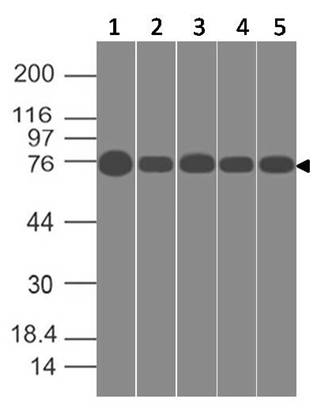