Download TDS / Manual
Source: Sf9, Baculovirus cells.
Sterile Filtered clear solution.
Interleukin-2 Receptor Gamma (IL2RG) is a cytokine receptor sub-unit which is common to the receptor complexes for at least six different interleukin receptors. IL2RG is located on the surface of immature blood-forming cells in bone marrow. One end of the IL2RG protein resides outside of the cell where it binds to cytokines and the other end of the IL2RG protein resides in the interior of the cell where it transmits signals to the cell's nucleus. IL2RG teams up with other proteins to direct blood-forming cells to form lymphocytes. In addition, IL2RG directs the growth and maturation of lymphocyte subtypes, which kill viruses, make antibodies, and help regulate the entire immune system.
IL2RG Human Recombinant produced in Sf9 Baculovirus cells is a single, glycosylated polypeptide chain containing 246 amino acids (23-262 a.a.) and having a molecular mass of 29kDa (Migrates at 40-57kDa on SDS-PAGE under reducing conditions).IL2RG is expressed with a 6 amino acid His tag at C-Terminus and purified by proprietary chromatographic techniques. 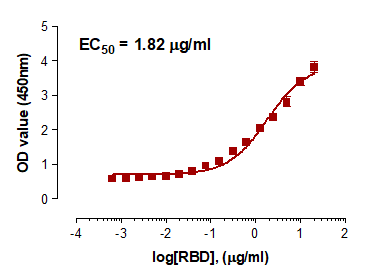