Download TDS / Manual
Source: Sf9, Baculovirus cells.
Sterile Filtered colorless solution.
SLAMF1 is a member of the immunoglobulin gene superfamily and is involved in T-cell stimulation. The SLAMF1 protein is constitutively expressed on peripheral blood memory T cells, T-cell clones, immature thymocytes, and a fraction of B cells, and is swiftly induced on naive T cells after activation. There are probably 2 modes of SLAM signaling: one in which the inhibitor SH2D1A serves as a negative regulator and another in which protein-tyrosine phosphatase 2C (PTPN11)-dependent signal transduction functions.
SLAMF1 Human Recombinant produced in Sf9 Baculovirus cells is a single, glycosylated polypeptide chain containing 226 amino acids (21-237a.a.) and having a molecular mass of 25.3kDa (Molecular size on SDS-PAGE will appear at approximately 28-40kDa).SLAMF1 is expressed with a 6 amino acid His tag at C-Terminus and purified by proprietary chromatographic techniques. 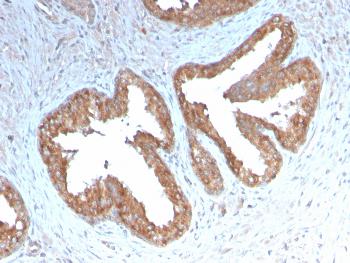