Download TDS / Manual
Source: Sf9, Baculovirus cells.
Sterile filtered colorless solution.
TIMP1 is a member of the TIMP family. TIMP1 is an inducible glycoprotein produced by various cell types. The TIMP1 glycoprotein is a natural inhibitor of the matrix metalloproteinases, which a group of peptidases involved in degradation of the extracellular matrix. TIMP1 binds in a reversible mode to MMPs, with regions in the N-terminal domain binding to the MMP substrate-binding site. On top of its inhibitory function against most of the known MMPs, TIMP1 is able to promote cell proliferation in a broad range of cell types, and may also have an anti-apoptotic role. Furthermore, TIMP1 has erthyroid-potentiating activity via translocation to the nucleus and also inhibits apoptosis in B-cells.The TIMP1 gene is situated within intron 6 of the synapsin I gene and is transcribed in the opposite direction. TIMP1 activity is dependent on the existence of disulfide bonds.TIMP1 transcription is extremely inducible in reaction to many cytokines and hormones.Increased TIMP1 levels are connected with squamous cell laryngeal carcinoma. TIMP1 overexpression is linked to gastric cancer.
TIMP1 produced in Sf9 Baculovirus cells is a single, glycosylated polypeptide chain (25-205 a.a.) and fused to a 6 aa His Tag at C-terminus containing a total of 187 amino acids and having a molecular mass of 21kDa.TIMP1 is purified by proprietary chromatographic techniques. 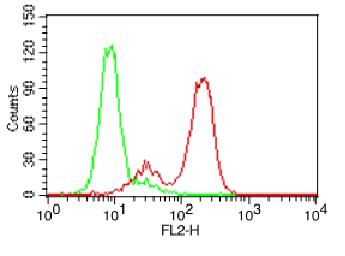